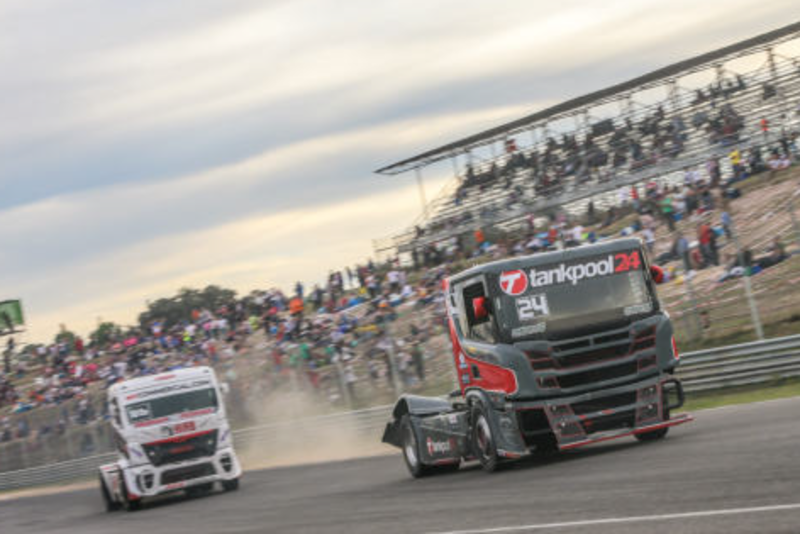 Two more podium finishes in the Goodyear Cup were added to this season’s accolades for Steffen Faas’ Scania truck (with Mabanol one of its sponsors) during the racing weekend from 1st-3rd October which was held in Jarama, Spain.

A severe accident which dealt British driver Shane Brereton a heavy blow during the first free practice early on Saturday morning turned things upside down as clearance and repair works had to be carried out which led to numerous disruption of the various races that were taking place. Taking these circumstances into account, Steffen Faas had to content himself with finishing 13th in the qualifying but did well enough to move up to third place in the Goodyear Cup which helped him to a podium finish.

He ran out of luck in the second race on Saturday. After going neck to neck with the Frenchman Anthony Janiec he finished 12th in the end.

On Sunday morning, Steffen Faas took 14th place in the warmup but the all teams were dealt a setback by a major incident that impeded the race. Another truck that took part in one of the non-competitive events crashed and oil leaked onto the racetrack, holding up all competitions. After wrapping up the cleaning efforts and some serious considerations by the organisers, it was finally decided to go ahead with waving the yellow flag throughout the race, hence making any overtaking manoeuvres all but impossible. Steffen Faas managed however to jump to 13th.

After a short interval the final race kicked off. Getting off to an impressive start, Steffen worked his way back up the places to snatch 10th place in the final table. This catapulted him again onto the Goodyear podium. Steffen Faas made the following comments after the race on Sunday: “Facing all these delays and disruptions, we did not have enough time to analyse the data between the races. Given these somewhat bizarre circumstances we are grateful for what we achieved. I would like to give full credit to our team that dug in deep despite the pressure they were under.”

For information on the race and the Tankpool24 Team visit