An eventful 2021 season kick-off – with an accident, a race stoppage and 3rd place on the podium 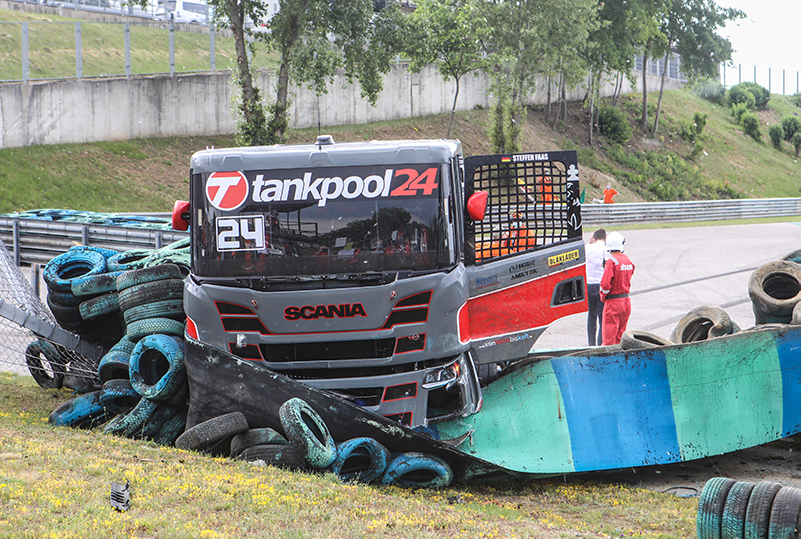 Last Friday, the tents were up in the paddock at the Hungaroring in Hungary and the atmosphere was relaxed. After the technical and administrative scrutineering as well as the online drivers' briefing, it was finally time for the trucks to start on Saturday.

The start was accompanied by bright sunshine. Steffen Faas had a good start in the Scania truck and finished in 8th place. In the second race of the day the Scania truck was hit by a strong impact to the right side in the first corner. Steffen's Scania spun around 270 degrees and stopped. Everyone drove passed him, but the Scania driver reacted quickly and launched a comeback to catch up with his competitors. But in the next curve came the next shock, the Scania truck was severely damaged. Instead of taking the left-hand curve, the Scania continued straight on and crashed into the track barrier. Steffen Faas was immediately treated at the medical centre, but fortunately nothing happened to him. The crash barrier had suffered heavy damage as a result and had to be replaced, which led to the race being stopped. The Tankpool24 Racing team set about analysing the damage and applied themselves to fix the Scania truck unti 4 o'clock in the morning.

On Sunday, the Scania truck with Steffen Faas was back on the track and fought his way to 11th place. In the third race Steffen managed to get third place in the Goodyear Cup.